See an Advance Screening of MINIONS: THE RISE OF GRU in South Florida 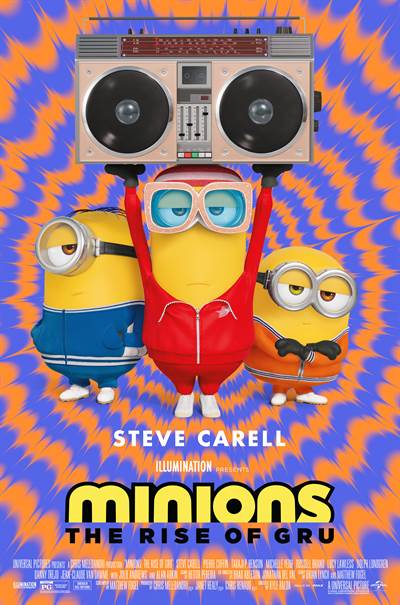 It has been a dozen years since Steve Carell (The Office) introduced the world to the character of Gru in the animated film, Despicable Me.  Along with Gru, came some very cute girls and even cute, little yellow guys called the Minions.  Since 2010, there have not only been sequels to Despicable Me but a series of spin-off films featuring the adorable Minions.  The latest entry in the ongoing saga, MINIONS: THE RISE OF GRU, heads to theaters on July 1, 2022.

Illuminations, in conjunction with FlickDirect, would like to offer some lucky winners one electronic admit-two pass to see an advance screening of MINIONS: THE RISE OF GRU at 7:00 pm on Monday, June 27, 2022, at one of the following locations Miami:  AMC Aventura or West Palm Beach: Cinemark Boynton Beach 14 before the film is released in theaters nationwide.

To enter for a chance to win one, admit two advance screening pass to see MINIONS: THE RISE OF GRU follow these easy steps:

Incomplete entries will be discarded.

In the heart of the 1970s, amid a flurry of feathered hair and flared jeans, Gru (Oscar® nominee Steve Carell) is growing up in the suburbs. A fanboy of a supervillain supergroup known as the Vicious 6, Gru hatches a plan to become evil enough to join them. Luckily, he gets some mayhem-making backup from his loyal followers, the Minions. Together, Kevin, Stuart, Bob, and Otto-a new Minion sporting braces and a desperate need to please-deploy their skills as they and Gru build their first lair, experiment with their first weapons and pull off their first missions.

When the Vicious 6 oust their leader, legendary fighter Wild Knuckles (Oscar® winner Alan Arkin), Gru interviews to become their newest member. It doesn't go well (to say the least), and only gets worse after Gru outsmarts them and suddenly finds himself the mortal enemy of the apex of evil. On the run, Gru will turn to an unlikely source for guidance, Wild Knuckles himself, and discover that even bad guys need a little help from their friends.

NO PURCHASE NECESSARY. Limit one pass per household.  Must be 13 years of age or older to win. Employees of all promotional partners and their agencies are not eligible. Void where prohibited.  Entries must be received by 11:59 pm on June 25, 2022, to be eligible to receive a pass. Winners will be contacted via e-mail to receive their electronic passes. Sponsors are not responsible for incomplete, lost, late, or misdirected entries or for failure to receive entries due to transmission or technical failures of any kind.  ONE ENTRY PER PERSON.

What To Expect When You Are Expecting

They Shall Not Grow Old