FlickDirect had a chance to interview Chad Lindberg.  Chad is on the circuit due to his role in the forth-coming, I Spit On Your Grave, remake, and his up-coming appearance as a bad guy in NBC's super hero show, The Cape.

I Spit on Your Grave is an ultra-violent, perhaps 'torture-porn' remake of a 1978 movie wherein a woman is attacked and repeatedly raped by four hillbillies.  Chad plays the mentally-retarded, 'remorseful' hillbilly Matthew who still does bad things.  Although they believe the victim is dead, she survives and comes back to sadistically murder each of them in gruesome, visceral ways.  The IMDB reviewer admitted that while the antagonists were despicable, he sort of wound up feeling sorry for them as the woman's revenge was 'even worse'!

Chad, as an actor, has a heck of a resume…he has appeared in shows from Buffy The Vampire Slayer to The X-Files, to Sons of Anarchy, as well as to Terminator: The Sarah Connor Chronicles to a recurring role with fans in Supernatural.

FlickDirect:   Hi, Chad.  Let's get started right away.  You have an upcoming appearance on The Cape.  I know you can't give away the secrets of the episode, but what are you able to tell us?  What was cool about working on The Cape?

Chad Lindberg: Oh, it was great.  I got to work with a bunch of wonderful actors:  David [Lynch, the star] is a very cool down-to-earth guy.  I had so much fun, and I didn't expect to get the role as it was a bad guy; and I am so not that at all.  I thought, "Can I pull it off?"  I think the studio originally wanted to go with a much bigger guy, but they went with me and made the interesting choice.

I play 'Hicks' [The episode is 'Goggles and Hicks'], and he is a really interesting fellow.  He is eccentric...odd.

FlickDirect: Did you do any cool stunt-work?  Combat scenes?

Chad Lindberg:  Heh -- my stunt-man did.

FlickDirect: You say you are not 'a bad guy', but you have, I Spit on Your Grave, coming out; and you are one of the rapists.  That sounds pretty bad, doesn't it?

Chad Lindberg: I hadn't expected to go down that road, really. Even in, I Spit on Your Grave, I am the 'reluctant villain'.  I play a mentally-challenged man whose friends goad him into doing bad things. He has a pure heart, but he does these horrible things because he wants to be loved...he gets into bad stuff.

FlickDirect: What do you think about I Spit as a movie?

Chad Lindberg: I, Spit on Your Grave, has a history behind it.  The original was something of a cult classic, and I felt really proud to be part of the remake.  I am proud of the work I did.  I have seen a lot of bad and a lot of good reviews, but I like the reviews of horror fans that were very skeptical at first but then saw it and loved it.  On the other hand...it is not for everybody.

FlickDirect: Has your mom seen it?

Chad Lindberg: [Laughs!] My mom?  Yes!  She did -- she was sitting right next to me at the premier.  My girlfriend was to my left.  My mom loved the movie.  She had one of those Japanese waving fans that folds out, and she used it to cover her face.  She had closed her eyes at certain parts, but she loved it.  She was proud of me and the job I did.

I'm pretty sure she wouldn't have seen it otherwise...

FlickDirect: That is great.  I probably wouldn't take my mom to see it.  Did you do any extensive gore-hose F/x type stuff?

Chad Lindberg: I didn't.  A lot of the other cast did.  My death wasn't as gory, although we all walked away with bruises.  My leg was bruised for a week completely up and down, but I got off easy.  Some of the others were tied up in very uncomfortable positions with a lot of blood.

A lot of the scenes were very, very intense both physically and emotionally. It is a very mature movie, and a lot of it made the hair on the backs of our necks stand up.  It was also one of the most creatively fulfilling experiences I have ever had.  I am excited people will get a chance to see it on DVD.

FlickDirect: When you got the script and the part, was there ever a moment when you thought "I'm going to have to play this guy in this movie...what have I gotten myself into!?"

Chad Lindberg: Not for a second.  I didn't know it was a remake.  We received the script; I read it and said "this is insane".   I have always responded to dark material, and I found a home there.  I connected with Matthew, and I thought I could do it, and I got the part.  It was exciting to be part of such a great movie.

Then I was home doing some research, and I found out it was a remake of a very well known film; and I said, 'Oh my God this is serious...'.  But then it was: bring it on!  I am all for controversy, and this was a unique experience.  I was glad to be a part of it.

FlickDirect: Cool. I want to talk about your other shows a bit.  You have played in some/a lot of my favorite TV shows.  I want to know something -- when you come on the set of a show, even for a small part, is the experience really different for each show, or is it somewhat the same -- come in, do your bit, and it is a wrap?  Do the different crews have a really different character or not?

Chad Lindberg: They are different. You know how each of the shows has a different tone?  Well, working on the sets has the same kind of tone.  What I mean is, you still come in and 'do the work', but the feel is different.  Like with the X-Files, it was already a phenomena when I came on, so that was cool.   You get to watch David Duchovny walking around saying all of these wild things, and it is just cool.

For Sons of Anarchy, I was roughed up by the guys.  You cannot help but think 'this is so bad-ass'.   It was like the guy who plays Tig [Kim Coats] just came at me, and he was gnarly.  I was a huge fan of the show, and it was a thrill to be on it.

FlickDirect: Then there is Supernatural.  You play Ash, an eccentric super genius who got killed, and came back in a later episode after some fan-outcry.  How does that work?  Is it a bit awkward when they kill you and then call you back and say, "Uh, I know we killed you, but we need you for another episode!"

Chad Lindberg: I got killed in Season 2, and the way I found out about it, sort of stinks.  It bums you out.  I didn't take it personally because you shouldn't, but I grieved for about 10 minutes and then got on with my life.  I mean, you have to trust the show's creators; they know where they want to go with it.

But then I started doing Supernatural conventions, and the fans were great.  Then Twitter came along, and I was on it; and I was being followed by a lot of Supernatural fans.  We started with a campaign to get me back on.  Some of them made fan videos, and they wrote letters to Eric Kripke [the show's creator], and they made enough noise, that he heard it.

I was filming, I Spit on Your Grave, and I got the call asking me to come back to do a really cool episode -- I was so excited!  It was amazing to have such a fantastic fan base, and I am really grateful to them.  Also, you know, with Supernatural...I could come back for real.  It is that kind of show.

FlickDirect: It really, really is [a lot of people die and come back!]  What is it like having fans?  Do you ever wake up in the morning and say, "I have fans? Holy cow, how did this ever happen to me!?"

Chad Lindberg: It is an interesting process.  I didn't expect to ever have that.  Fast and the Furious [he plays Jesse, one of Vin Diesel's deputies] was life changing.  It kind of throws you when someone comes up and recognizes you, and you don't expect it.  It can be jarring.  But I love it -- most of the people I meet that way are really cool and genuine.

And yes, I am sort of a homebody when I am not working, and I keep to myself so I don't let it screw with my head.  I communicate with the fan base on Twitter, and that is great.  I think I have a solid relationship with the fans - that is important.

FlickDirect: Is there a show you see out there that you would really like to be a part of?

Chad Lindberg: Tru Blood.  Lost would have been great too. I would like to have been on that.  I am watching SouthLand now, and I would love to play a cop.  Right now though, I am very happy.  2011 is going to be great year for me.  I think I have a big enough TV audience that I would like to have a regular show with me as the lead.  I am hoping that happens, but right now I am keeping busy and living life.

FlickDirect: Well, Tru Blood is another of my favorite shows, so it looks like you might have a shot just based on the number of shows I like that you are in!  Great talking to you and good luck. 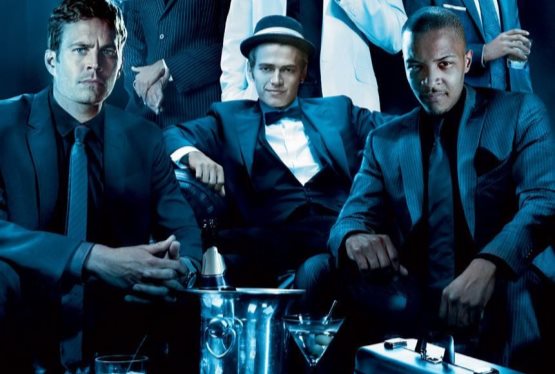