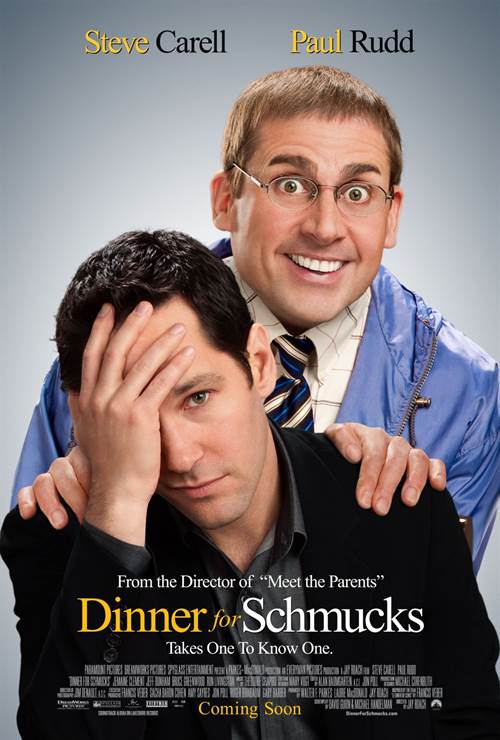 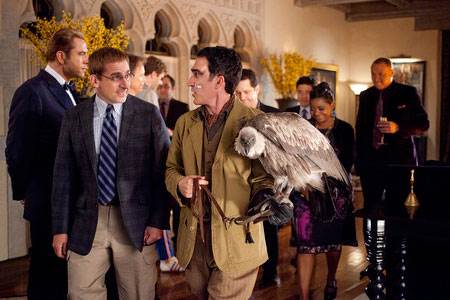 Dinner for Schmucks tells the story of Tim (Paul Rudd), a guy on the verge of having it all. The only thing standing between him and total career success is finding the perfect guest to bring to his boss' annual Dinner for Extraordinary People, an event where the winner of the evening brings the most eccentric character as his guest. Enter Barry (Steve Carell), a guy with a passion for dressing mice up in tiny outfits to recreate great works of art. From Jay Roach, director of "Meet the Parents" and "Meet the Fockers" comes an unforgettable feast about two unlikely friends and one very memorable dinner.

Stream Dinner For Schmucks in Digital HD/4K from the AppleTV store.

Dinner For Schmucks images are © Paramount Pictures. All Rights Reserved. 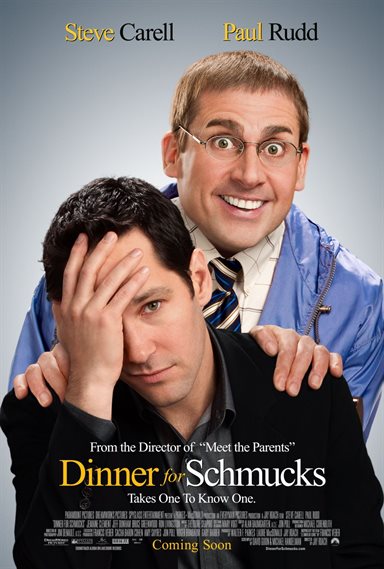 Where should we place him on the Michael Scott axis?  It is the first question brought to our minds by the appearance of by now quite typecast Steve Carell (The Office, The 40-Year Old Virgin).  It is easiest to say in this regard, though perhaps a bit unfairly, that Barry (Carell) is a slightly nicer and more creative Michael Scott with special powers appropriate to his personality.

Of course, Barry is fundamentally good-natured, so to side with Tim (Paul Rudd, Clueless, I Love You, Man), as we are expected to, we must accept that he would befriend Barry, though perhaps after a fashion.  But Barry's special ability to arrange extremely embarrassing circumstances to hurt those around him both personally and professionally, the source of most of Dinner For Schmucks's comedy, also serves as the source of all the tension in the film.  Tim frets about the importance of his impending promotion to his relationship with Julie (Jemaine Clement, The Devil Wears Prada, The Rebound), perhaps unnecessarily.  But we, as humans, prefer some semblance of order in our lives; even the most adventurous demand structure, if only in constant danger.  As such, I cannot believe that, given how much damage Barry does to Tim and Julie in only a short time of knowing them, they could stand to be around him for long.  Perhaps Tim really was an idiot, and would have become the architect of his own end, but I must imagine that he would have rather discovered that on his own.

I think that even the filmmakers recognized the ultimate impracticality of friendship with Barry, or were too afraid to pursue the implications of the conceptual core of Barry.  So they gave him further special traits not quite in keeping with the essence of his character.  These serve as the permanent scaffolding of Barry and Tim's relationship, and despite the filmmakers' best efforts, its dissociation with the overall notion of reality in the context of the film is often jarring.  Specifically, these are a uniquely charming artistic gift, and an extreme sense of loyalty to the friends he is hurting, supposing you find loyalty intrinsically valuable.  This is not to say that a "schmuck" is not capable of devotedly producing uniquely charming art, but rather that it strikingly violates the concept of the character.

The latter funny trait, loyalty, causes Barry to occasionally realign his worldview so as to build a friendship with Tim.  But its obvious purpose is to patch holes in that friendship created by Tim's cruelty toward him.  Each time it happens, it seems to turn such a moment of cruelty into a moment of bonding, but we oughtn't forget Tim's underlying impulse, and the ultimate dysfunction in their friendship that it implies.

Supporting characters Kieran (Jemaine Clement, The Flight of the Concords, Despicable Me) and Susana (Kristen Schaal, The Flight of the Conchords, Toy Story 3) provide some pleasant diversions, especially in the former's interactions with Barry.  Unfortunately, setting aside the devaluing of the concept of Barry, the frequent telegraphing of punchlines, in some cases up to a minute in advance, forces us to devalue the key currency of any film such as this: is this funny?