Legends collide in “Godzilla vs. Kong” as these mythic adversaries meet in a spectacular battle for the ages, with the fate of the world hanging in the balance. Kong and his protectors undertake a perilous journey to find his true home, and with them is Jia, a young orphaned girl with whom he has formed a unique and powerful bond. But they unexpectedly find themselves in the path of an enraged Godzilla, cutting a swath of destruction across the globe. The epic clash between the two titans— instigated by unseen forces—is only the beginning of the mystery that lies deep within the core of the Earth.

Listen to the Godzilla vs Kong soundtrack on Apple Music.

Godzilla vs Kong images are © Warner Bros.. All Rights Reserved.

Legendary Entertainment May Take Legal Action Over Warner Bros. ...  12/7/2020 2:15 PM EDT
Legendary Entertainment may be pursuing legal action against Warner Bros. after the announcement of the studio releasing its films to HBO Max and theatres simultaneously.Legendary co-financed "Dune" and "Godzilla vs. Kong", both high budget films, coming at $175 million and $160 million, respectively. Apparently, they claim they were unaware of Warner Bros. plans to release the films on HBO Max. T...  More>>

Adam Wingard to Direct Godzilla vs. Kong  6/1/2017 1:59 PM EDT
Adam Wingard has been chosen to direct the upcoming film "Godzilla vs. Kong."  Wingard has previously directed "The Guest" and the "Blair Witch" reboot.The film will be written by Terry Rossio and will be one of a series of films the "MonsterVerse" franchise from Warner Bros.  They also have another film on the backburner, "Godzilla: King of the Monsters", which will star Millie Bobby Brown, Kyle ...  More>> 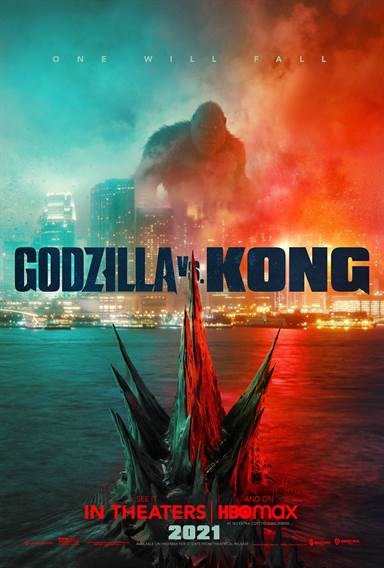 It is the age-old battle… predator vs. prey, man vs. beast, lizard vs. ape, or more precisely Godzilla vs. Kong.  In the world of filmdom, the latter predates the former by twenty-one years.  However, the debate as to which creature would win in a fight has raged on three times along.  Of course, this month's feature film is not the first time the two titans have met on the big screen.  Previously, they fought in King Kong vs. Godzilla, a 1962 Japanese film and, while on the surface, it seemed that Kong was the winner, the audience was left wondering whether or not Godzilla was really dead. Almost sixty years later, Warner Bros. Once again raises the question of which one of them would win?

After Godzilla defeated King Ghidorah, he and Kong are the only two known Titan creatures left on Earth.  Since Skull Island has become destabilized, Kong now lives in a giant dome controlled by Monarch and is often visited by a deaf Iwi girl named Jia (newcomer Kaylee Hottle).  Meanwhile, Godzilla heads towards Florida and attacks an Apex Cybermetrics Corporation facility.  Bernie Hayes (Brian Tyree Henry; If Beale Street Could Talk), infiltrates Apex as a maintenance worker and discovers an ORCA device that was previously used to try and control the Titans.

However, Once Kong is moved from his dome Godzilla attacks him, but he and the ship's crew narrowly escape and find the opening to hollow Earth.  The team follows Kong on his journey "home" and when they find the King's/Godzilla's power source, Apex employees take to bring their creation to life.  Suddenly, it isn't just Kong and Godzilla fighting but Mechagodzilla as well.

Director Adam Wingard (The Guest) assembles a solid cast, some of whom we have seen in Godzilla: King of Monsters. Skarsgård plays a nerdy scientist who is actually afraid of Kong, While Hall portrays Andrews as very confident and capable while still being a loving mother to Jia.  Hottle is excellent and is not only cute but draws attention every time she is on screen.  Henry is comic relief but adding Madison Russell (Millie Bobby Brown; Stranger Things) and her friend Josh Valentine (Julian Dennison; Deadpool 2) was unnecessary and while I think they are great; the movie would have been the same with or without them.

The special effect and fight scenes are well done, which will probably make any true Kong and/or Godzilla fan happy.  However, while the original soundtrack is pulsating with drumbeats, the few commercial songs Wingard used during the opening scene, later when Kong is chained to the ship, etc. were stupid and cheesy and add nothing to the movie besides eliciting a possible groan from the audience.

Do you have a favorite Titan?  Have you taken bets on which monster reigns as king after their epic battles are over?  Are you heading to the movie theater as soon as the movie opens?

Godzilla vs. Kong has a lot of different things going on all at once and, for me, it distracted from the overall experience.  Cheesy, too long, and one big, muddled mess makes for a rather unappealing and ineffective movie, so please put the debate to rest for a while and stop making King Kong/Godzilla movies.

If Beale Street Could Talk