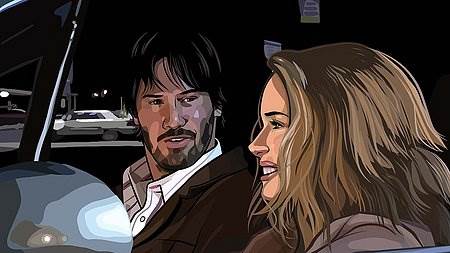 America's endless and futile war on drugs has become one and the same with its war on terror. Reluctant undercover cop Bob Arctor (Keanu Reeves) follows orders to start spying on his friends, Jim Barris (Robert Downey Jr.), Ernie Luckman (Woody Harrelson), Donna Hawthorne (Winona Ryder) and Charles Freck (Rory Cochrane). When he is directed to step up the surveillance on himself, he is launched on a paranoid journey into the absurd, where identities and loyalties are impossible to decode. Based on legendary science-fiction author Philip K. Dick’s own experiences, “A Scanner Darkly” tells the darkly comedic, caustic, but deeply tragic tale of drug use in the modern world. The film plays like a graphic novel come to life with live-action photography overlaid with an advanced animation process—a method known as interpolated rotoscoping, first employed in writer/director Richard Linklater's 2001 film "Waking Life" - to create a haunting version of America, seven years from now.

Download A Scanner Darkly in Digital HD/4K from the iTunes store.