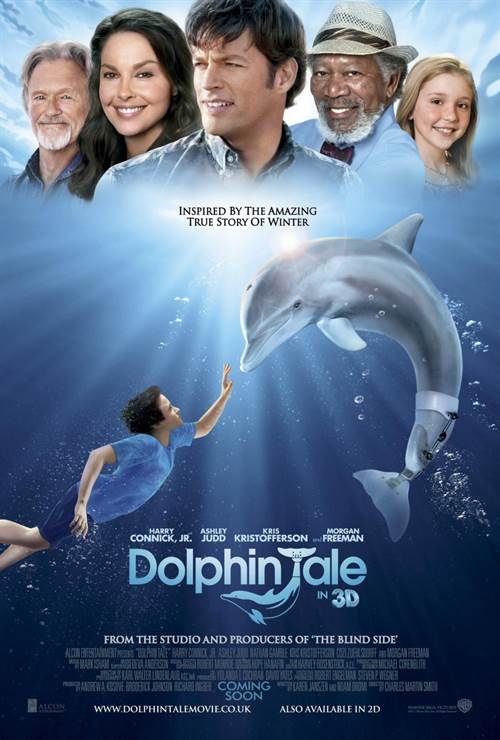 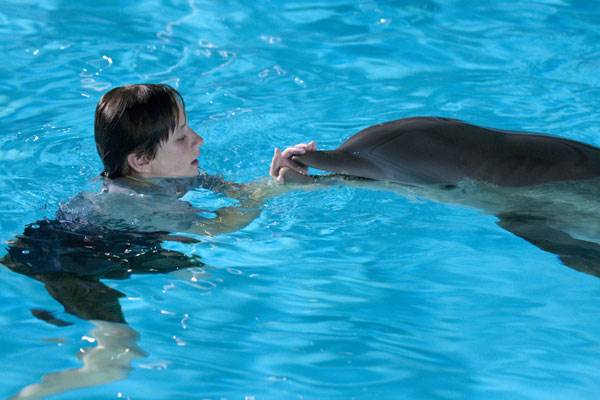 While swimming free in the ocean, a young dolphin becomes caught in a trap and severely damages her tail. Though she is rescued and transported to the Clearwater Marine Hospital, her tail cannot be saved, and her prognosis is dire. What the dolphin, now named Winter, needs is a miracle. She gets that miracle in the form of a marine biologist (Harry Connick Jr.), a prosthetics designer (Morgan Freeman), and a devoted boy (Nathan Gamble), who find a way to help Winter swim again.

Download Dolphin Tale in Digital HD/4K from the iTunes store. 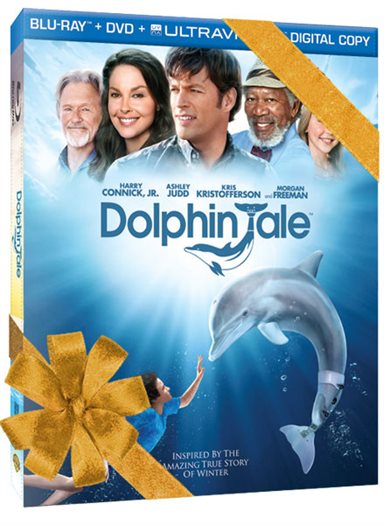 Dolphin Tale presents a staggering compilation of various cinematic clichés so transparent a kid could see through them. For a while, the film is so blandly average in said clichés that it nearly passes by as a simple bore. Then the third act kicks in and the onslaught becomes so incessant that by the end, it wouldn't be surprising if future film students use those final scenes as an example of what not to do in a movie.
The film is based on an unfortunate true story -- not unfortunate because the story is downbeat or sad, but because the real-life participants have to forever admit that their lives were dramatized in a movie that would be rejected by half of the major cable networks. There have been plenty of real-life stories exploited for commercial gain, but this one is especially seedy. It finds a way to simultaneously over exploit patriotism and physical disabilities as part of a story of a dolphin that, true as its roots may be, must have been so lacking in organic human drama that the filmmakers felt the need to tack on an ungainly amount of embarrassing melodrama.
Harry Connick, Jr., Ashley Judd, and Morgan Freeman headline the film's happy advertising campaign, but the story centers on poor Sawyer (Nathan Gamble), who is despondent to the point that he's nearly mute. So depressed is Sawyer over the absence of his recently-deployed soldier cousin (Austin Stowell) that he literally rides around town on his bike, barely acknowledging the world. But our little hero perks right up when he serendipitously stumbles upon a dolphin washed up on the shore of the local beach, its tail caught in a crab trap. After Connick and his team of marine biology super friends arrive to rescue the dolphin and nurse it back to health, Sawyer becomes a fixture at Connick's struggling lab, where he forms a bond with the animal -- named 'Winter' -- that will obviously last a lifetime.
Judd plays Sawyer's single mom, who is at first skeptical of her son's summertime obsession, but she is quickly drawn into Winter's plight. Freeman is a wise-cracking prosthetics expert brought in to devise a mechanical tail for Winter, since she lost hers to the crab trap and can't survive without a functioning appendage. Such an endeavor comes with more than its fair share of trials and tribulations, which are regurgitated in a continual pattern of elated hope followed by catastrophic depression. This film far exceeds the audience's capacity for willing acceptance of tear-jerking moments of truth.
Clearly, clichés are fused inextricably with Dolphin Tale's DNA, but as the film plods along, it juggles an amazing amount of rote formulas all at once. Sawyer is the troubled boy who misses a long-lost family member. His bond with Winter is stripped directly from the playbook utilized by film from Old Yeller to Free Willy. The training/rehabilitation of irresistibly cute but unavoidably stubborn animal is an age-old device. But it doesn't stop there. Soon the soldier cousin, once a high school swim team hero, returns from the battlefield wounded and depressed -- but he must find the will to swim again (hey, just like the dolphin!). As if that wasn't enough, Connick's struggling lab is under threat of an evil corporate buyout, which obviously means all loose story strands must come together at a whimsical fundraising carnival, at which the soldier swims tag-team with Winter and all is made right with the world.
The newly arrived Blu-ray boasts some interesting features for the viewer if they wish to look past the film. The film itself looks astounding, as only Blu-ray can deliver and the scenes of Winter swimming through the water are exceptional to watch. Over at the special features menu you can view 2 shorts, on an animated feature about Ormie the pig and another narrated by Harry Connick Jr. about the legend of the Rainbow Bridge. Also there is a behind-the-scenes short taking a look at the real life home of Winter, another feature about how the filmmakers combined 3D effects and underwater footage for the opening sequence, a look at the real dolphin Winter, an additional scene not in the movie and finally a gag-reel.
What certainly could have been a heart warming story of triumph over adversity becomes a victim to the Hollywood formula. Dolphin Tale might have been a hit at the box office had the filmmakers found a way to translate the tale that didn't talk down to the audience, however that wasn't case and we are left with this unfortunate cliché story.