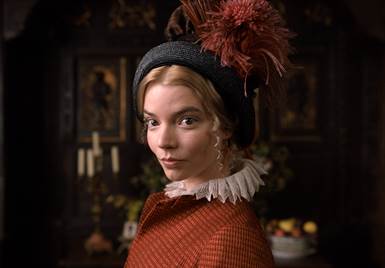 Jane Austen’s beloved comedy about finding your equal and earning your happy ending is reimagined in this delicious new film adaptation of EMMA. Handsome, clever, and rich, Emma Woodhouse is a restless queen bee without rivals in her sleepy little town.  In this glittering satire of social class and the pain of growing up, Emma must adventure through misguided matches and romantic missteps to find the love that has been there all along.

Download Emma in Digital HD/4K from the iTunes store. 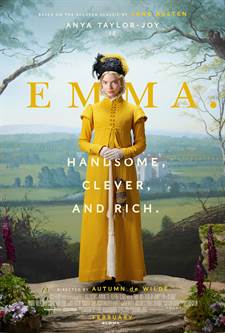 Jane Austen published four novels in her short life and two more were published posthumously. The original four, Mansfield Park, Sense and Sensibility, Pride and Prejudice and Emma, have not only been part of school curriculums the world over but have been adapted for both television and theatrical release.  The latter, Emma, even had a modern-day adaptation in the 1995 hit, Clueless, starring Alicia Silverstone (Batman & Robin) and Paul Rudd (Ant-Man).  The latest version of this witty and endearing story stars Anya Taylor-Joy (The Witch) as Emma.  Thus far it has seen limited release but will widen its viewing locations in the coming weeks.

Emma is twenty-one years old and lives at home with her father, Mr. Woodhouse (Bill Nighy; Pirates of the Caribbean: Dead Man's Chest).   While she has no intention of marrying, she tends to be a bit of a matchmaker where others are concerned.  She is clever, intelligent and a good deal manipulating to those around her.  She takes a schoolgirl of simple means, Harriet (Mia Goth; Suspiria), under her wing and schools Harriet on proper etiquette when it comes to flirtatious young men.  Rejecting Harriet's affections for a simple farmer named Robert Martin (Connor Swindells; The Vanishing), Emma convinces Harriet that Mr. Elton (Josh O'Connor; The Crown), the local Vicar, has amorous intentions towards her.

However, it seems Mr. Elton was really chasing Emma, who of course rejected his advances.  Meanwhile, Emma awaits the return of Frank Churchill (Callum Turner; Green Room) but misinterprets Harriet's rantings and believes she too is in love with Churchill.  Harriet is speaking of Emma's neighbor and constant annoyance, George Knightly (Johnny Flynn; Beast) though.  When Emma discovers Churchill is secretly engaged, she goes to comfort Harriet who reveals she pines for Knightly.  It is then Emma discovers her own deeply buried desire for Knightly.  She rightfully, though selfish and jealously, convinces Harriet to once again steer her attention towards Mr. Martin.

Taylor-Joy has proven herself a talented actor with her leading debut in The Witch.  Since then she has continued to delight audiences especially with her portrayal of Casey Cooke opposite James McAvoy in Split. It should be no surprise then that she is wholly suited to the leading role of Emma and navigates the script extremely well.  She displays a combination of intelligence, cunning and a little bit of conniver ensuring the audience is certain to be enamored with her.  Goth, Nighy, O'Connor, Turner, and Flynn compliment Taylor-Joy well and as an ensemble, they work nicely together.

Jane Austen's writings are classics for a reason.  They are still able to entertain audiences two hundred years later.  The story of Emma is witty, clever, and entertaining and director Autumn de Wilde (The Postman Dreams) navigates her cast to bring out wonderful performances while also offering viewers sweeping landscapes with a tinge of realism.  While her pacing is a little slow, in the beginning, the story does pick up to a happily ever after ending.

Emma has had numerous iterations with more to come I'm sure but this version is well done and worthy of watching at least once.  Taylor- Joy is terrific and Nighy can steal a scene with a mere glance - a display of his exceptional talent.  While O'Connor, Turner and Flynn cold practically be interchangeable, they work well as the backdrop in this period piece, allowing the females to take center stage.

Ladies, if you are an Austin fan and enjoy romantic comedies, I can recommend Emma as a must-see.  Gentlemen, if you know what is good for you, you will escort your female companion to this film…who knows, you may learn a thing or two.