Sam Mendes, the Oscar®-winning director of Skyfall, Spectre and American Beauty, brings his singular vision to his World War I epic, 1917.

At the height of the First World War, two young British soldiers, Schofield (Captain Fantastic’s George MacKay) and Blake (Game of Thrones’ Dean-Charles Chapman) are given a seemingly impossible mission. In a race against time, they must cross enemy territory and deliver a message that will stop a deadly attack on hundreds of soldiers—Blake’s own brother among them. 1917 is directed by Sam Mendes, who wrote the screenplay with Krysty Wilson-Cairns (Showtime’s Penny Dreadful). The film is produced by Mendes and Pippa Harris (co-executive producer, Revolutionary Road; executive producer, Away We Go) for their Neal Street Productions, Jayne-Ann Tenggren (co-producer, The Rhythm Section; associate producer, Spectre), Callum McDougall (executive producer, Mary Poppins Returns, Skyfall) and Brian Oliver (executive producer, Rocketman; Black Swan).

Listen to the 1917 soundtrack on Apple Music.


Experience 1917's Trenches in Augmented Reality  1/7/2020 9:54 AM EDT
If you are a fan of the film "1917", then you will be interested in this new app. Now, you can step into the trenches and experience the making of the Golden Globe Award-winning film in 360° and Augmented Reality from your phone or mobile device.This app utilizes the latest AR technology allowing you to 'step inside' and experience the trenches in real scale. All of the environments you are explor...  More>> 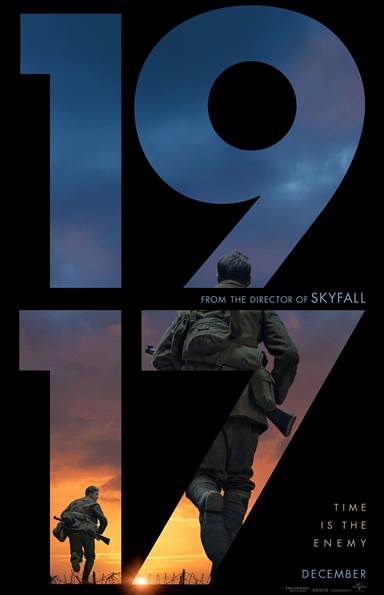 In June of 1914, Archduke Franz Ferdinand was assassinated setting off the First World War.  One of the biggest and bloodiest wars ever, it saw the world divided into two sides with fighting occurring through much of Europe. As the war raged on military and civilian casualties numbered in the millions.  Director Sam Mendes (Skyfall) penned a script based on old war stories from WWI told him by his grandfather, Alfred.  The result is the Golden Globe-winning/sure to be Oscar-nominated film, 1917.   Beautifully and expertly shot, it offers another view of war that is hard to escape.  However, I'm not sure you would want to with this terrific piece of storytelling.

By 1917 British, French and Russian forces were entrenched in northern France fighting German forces.  When the Germans retreat the British army falsely believes they are winning and plan a strike upon the Germans. What they don't know is the German retreat is all a part of their plan to ambush the British troops.  Intelligence indicates 1,600 men are being set up to be slaughtered.   Word needs to get to the front lines to call off the attack.

Two young Lance Corporals, Blake (Dean-Charles Chapman; Game of Thrones) and Schofield (George MacKay; Captain Fantastic) are sent on a mission to warn the British troops.  Setting out, the two young men cross no man's land and find the German trenches abandoned and booby-trapped. Barely escaping with their lives they end up at an abandoned farmhouse and watch as a German plane goes down in a dogfight.  While trying to help the pilot he stabs and kills Blake forcing Schofield to continue on his own.  Dodging enemy troops and snipers along the way, Schofield eventually makes it to the front line to find that the attack has already started.  He manages to get the message to the commanding officer in time though and the attack is stopped, saving countless men's lives.

Mendes doesn't shy away from the difficult subjects when telling this story.  We watch as Schofield holds Blake while he dies and in the end when has to tell Blake's brother of his passing.  He takes us to a small hiding space where a young woman and a baby are living in fear of being discovered.  He offers visuals of trenches full of rotting corpses as the two men carefully make their way across no man's land. He also gives the viewer a unique experience by showing a first-person point of view and doing so with minimal edits.  The cinematography is alternately eerie and breathtaking and depicts the devastation of a country at war.

Chapman and MacKay portray the naïve soldiers like the wide-eyed youth they are supposed to be.  Their shock and horror at the sights as they travail no man's land seems to accurately depict the inexperience of their characters.  Mendes seems to have called in a few favors as Colin Firth (The King's Speech), Mark Strong (Kingsman: The Secret Service), and Benedict Cumberbatch (Doctor Strange) all make cameo appearances in the film.

If you are looking for a master class in filmmaking – from scriptwriting to visuals to special effects - 1917 is certainly a movie to study.  It fires on all cylinders and gets pretty much everything right.  Mendes pulls us in with the story and keeps us watching from beginning to end.

With so many films about the horrors of war – especially the World Wars – you may ask why you should see this one.  Simply put…because it gets it right in all aspects, it's gripping and entertaining (as much as a film about war can be), and it keeps the audience engaged from beginning to end.  It should come as no surprise that 1917 will win many awards this season. 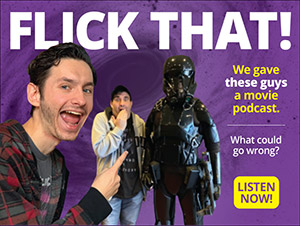