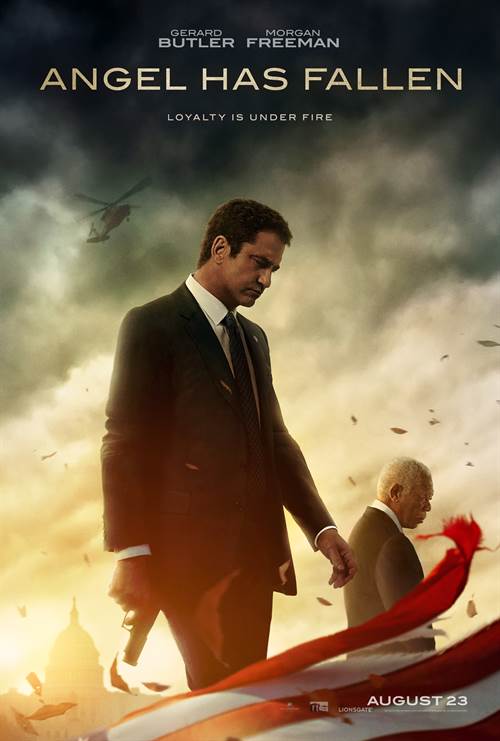 When there is an assassination attempt on U.S. President Allan Trumbull (Morgan Freeman), his trusted confidant, Secret Service Agent Mike Banning (Gerard Butler), is wrongfully accused and taken into custody. After escaping from capture, he becomes a man on the run and must evade his own agency and outsmart the FBI in order to find the real threat to the President. Desperate to uncover the truth, Banning turns to unlikely allies to help clear his name, keep his family from harm and save the country from imminent danger.

Download Angel Has Fallen in Digital HD/4K from the iTunes store.

Angel Has Fallen images are © Lionsgate. All Rights Reserved. 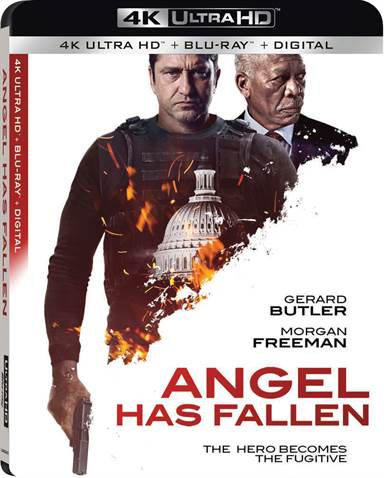 In 2013 audiences were first introduced to Secret Service Agent Mike Banning (Gerard Butler; The Phantom of the Opera) when he protected the White House and the President of the United States in Olympus Has Fallen.  Three years later he returned to the character once again in the sequel, London Has Fallen.  This year the third installment in the trilogy made its way to theaters when Angel Has Fallen debuted on August 23, 2019.  Just in time for the Black Friday sales rush, the movie makes its way to stores on 4K, Blu-ray, DVD and Digital.  At two hours long this action/drama will be a great stocking stuffer for fans of the franchise.

Mike Banning has been a secret service agent for a long time and with the news that Director David Gentry (Lance Reddick; The John Wick Trilogy) is planning to retire many feel Banning would be next in line for the job.  It's only natural then that Banning's military buddy, Wade Jennings (Danny Huston; X-Men Origins: Wolverine), who now owns a tactical training facility, asks Banning to consider his company for government jobs.  While Mike promises to do so, he isn't exactly certain he really wants the Director's job.

A few days later, while on a fishing retreat, The President (Morgan Freeman; The Shawshank Redemption) is attacked by drones and the whole secret service team guarding him are killed…besides Banning.  The next day Banning's DNA is discovered inside an abandoned van that was used for the attack.  The FBI arrests Banning and accuses him of trying to assassinate the President.   While Banning knows he is being set up, he needs to figure out by whom and  the motive for framing him. Once Banning manages to put all the pieces together he must find a way to save the President and bring the guilty parties, including his friend Jennings, to justice.

Banning is a recurring role for Butler because generally he plays it well.  This time though, as the main focus of the plot, Butler seems too calm and collected.  Even though he was trained to deal with unfortunate situation, it would have been nice to see more emotion from him as he is accused of a crime he didn't commit.  Freeman is once again wonderful as the elder statesman who brings a regality to the Commander in Chief.  Nick Nolte (48 Hours) is perfectly cast as Mike's "off the grid – antigovernment" father and Jada Pinkett-Smith (The Matrix Reloaded) is bad ass – when isn't she? – as FBI agent Thompson assigned to investigate Banning and the attempt on the President's life.

The Dolby Vision High Definition Resolution kicks into high gear on this release.  Details are sharp, colors and crisp and the overall video quality is pristine.  The Dolby Atmos audio is spot on as well.  Sound effects are punched up and dialogue is clean with no noise at all.  The combo pack includes the 4k Disc, Blu-ray disc and Digital code plus a hearty helping of extras including Introduction with Gerard Butler, Even Heroes Fall: The Story, Someone To Watch Over Me: New Blood, Calling All Angels: Casting, True Faith: Authenticity, Fights For You: Stunts and Action, Earth Angel: Recreating DC and Angel Declassified.

Angel Has Fallen isn't quite as the same level as the previous two films but the shift from a location to a person taking a "fall" made for a new twist on the plot.  Unfortunately, it wasn't as entertaining and the "collateral damage" of the innocent victims body count is rather sobering and depressing.

Butler/Banning fans will want this third movie to line their bookshelves along with the first two for a complete set but don't expect the movie to be as strong as the others.