The television series Downton Abbey followed the lives of the Crawley family and the servants who worked for them at the turn of the 20th century in an Edwardian English country house. Over its 6 seasons, the series garnered 3 Golden Globe Awards, 15 Primetime Emmy Awards, 69 Emmy nominations in total, making Downton Abbey the most nominated non-US television show in the history of the Emmys - even earning a Special BAFTA award and a Guinness World Record for the highest critically rated TV show along the way.

Download Downton Abbey in Digital HD/4K from the iTunes store. 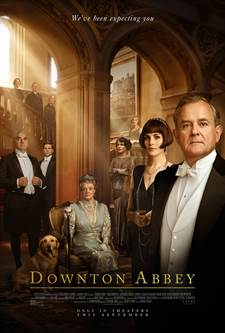 "Downton Abbey" is sumptuous and stylish in a way the touches your heart and moves your soul. It's rather like a cherished overcoat you snuggle into in winter that's at once familiar, comfortable and warm. Of all the British period pieces about upper class families living in the 1920's that I've seen over the years, this one is by far the best.

With a meticulous eye to detail, at every level, and what appears to be a deep understanding of the morality, politics, and class structure of the times, creator/writer Julian Fellows has delivered a very satisfying addition to the Crawley family saga.

Although "Downton Abbey" was singularly the most successful series ever aired on PBS, I have to admit that I had never seen any episode before viewing this new film. It made absolutely no difference. I slid easily into the story, was introduced to the characters without any confusion and followed the plot with joyous anticipation. You will too.

The year is 1927. A letter has been sent from Buckingham Palace to Downton Abbey, the Yorkshire country estate owned by The Earl of Grantham and his family. To the surprise, honor, and apprehension of everyone at Downton, the letter heralds the imminent visit of King George and Queen Mary, who plan to spend a night there while on their Royal tour of the surrounding countryside.

Anticipation of the coming visit moves the entire aristocratic family and their large staff of household servants into full Regal preparation, proudly sprucing up everything on and about the property to show how wonderful it is.
However, when the Royal Staff arrive they take complete control of everything involving the visit. Caught off guard by their arrogance, the Downton staff tries to figure out how to again take back control. While this is going on, the family finds itself dealing with their own problems; scandal, line of succession, inheritance, finances, and intrigue.
All in all it's a wonderful Edwardian drama, beautifully acted and set against a background of perfect period recreation. Since in every way this is a true acting ensemble piece, I can't pick out one performance I liked above another; they are all wonderful.
The costumes, set design, set decoration, locations, and mechanized machines are all spot on and a joy to observe. Additionally, the cinematography by Ben Smithard is breathtaking and finds its perfect match in John Lunn's exquisite musical score.

My take… "Downton Abbey" is simply a great film experience. See it on the big screen or you'll miss the sweep of its grandeur. By the way, I'm now binge watching the whole series, which is free on Amazon Prime.