Let’s face it, anything Tom Hanks is in becomes elevated to the next level by his mere presence. 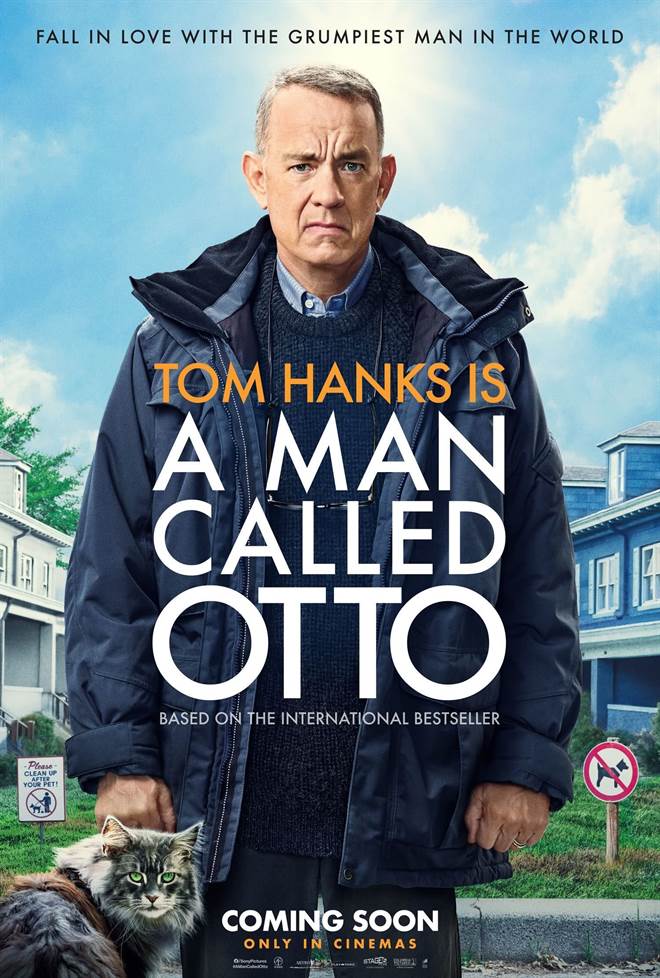 In 2012, Swedish writer Fredrik Backman's latest book, A Man Called One, was published.  A year later the novel was printed in English and spent forty-two weeks on the New York Times Best Seller list.  In 2015 it was adapted into a Swedish film with the same title.  This week, the second adaptation, A Man Called Otto, goes up against the feature, Avatar: The Way of Water, a horror movie, M3GAN, and the new action film, Plane.  Starring Tom Hanks (Forrest Gump) as Otto, the drama has already been seen by some audiences in limited release (most likely for Award consideration).

Otto is a grumpy, old man living alone in Pittsburgh, Pennsylvania.  He has the same routine every day, patrolling the neighborhood, documenting violations and infractions made by those living around him.  He lives a solitary life since his wife passed away a few years earlier.  Missing her terribly, and no longer seeing any purpose in his life, he attempts to commit suicide several times.  One day a new couple and their children move in across the street, and Marisol (Mariana Treviño; Overboard) immediately introduces herself to Otto, who is instantly annoyed by Marisol. Over time, though, Marisol wears Otto down, gets under his skin, and changes his life forever.

Let's face it, anything Tom Hanks is in becomes elevated to the next level by his mere presence.  He is the consummate actor and he chooses projects that people generally find interesting.  Portraying a grumpy old man in this film could have backfired though because he has a reputation for being a sweet, genuine type of guy. Could he pull off "grumpy" and would audiences believe his performance?  Of course, he can and yes we would!

Then the next question became would the production team be able to find someone who could match Hanks' expertise and not be overshadowed by the two-time Oscar winner?  Enter Treviño who goes toe to toe with Hanks and not only meets him as an equal in their scenes together but occasionally even, dare I say, outshines the veteran actor.  A Man Called Otto would have been a VERY different movie had either or both Hanks and Treviño not been cast.  The rest of the ensemble pretty much stays in the background providing window dressing for the two leads but the little girls who play Marisol's daughters are cute and add to the overall character Hanks has built with Otto.

The cold, winter and snowy background of the Pittsburgh housing complex used in the film adds to the overall feel of the film.  If you were looking for something more bright and airy, then Otto is not the movie for you.  This is a heavy-duty, four-tissue kind of film that will leave you teary-eyed by the time the credits roll.  It does have a few humorous moments but overall it is more on the solemn side of the emotional spectrum.  Screenwriter David Magee (Mary Poppins Returns) does manage to balance the emotional tide throughout the movie helped by the two leads reciting his words.

Take a grumpy, old widower who does everything by the book and sees the world in black and white, bring in a feral cat and a transgender teen who Otto briefly helps, as well as the big, bad corporation trying to buy out all the owners in the housing complex so they can tear it down to build bigger living spaces and you basically have the live-action version of the 2009 animated feature Up.  While Up was cuter and funnier, A Man Called Otto has a similar feel spearheaded by two terrific actors who give this movie its heart and soul.

Having been in limited release since just before New Year's, A Man Called Otto opens wide this weekend and it will be interesting to see how it fares at the box office.

Snakes On A Plane