While Boseman’s absence is definitely felt, most of the incredibly talented cast from the first film returns elevating the level of acting throughout the film. 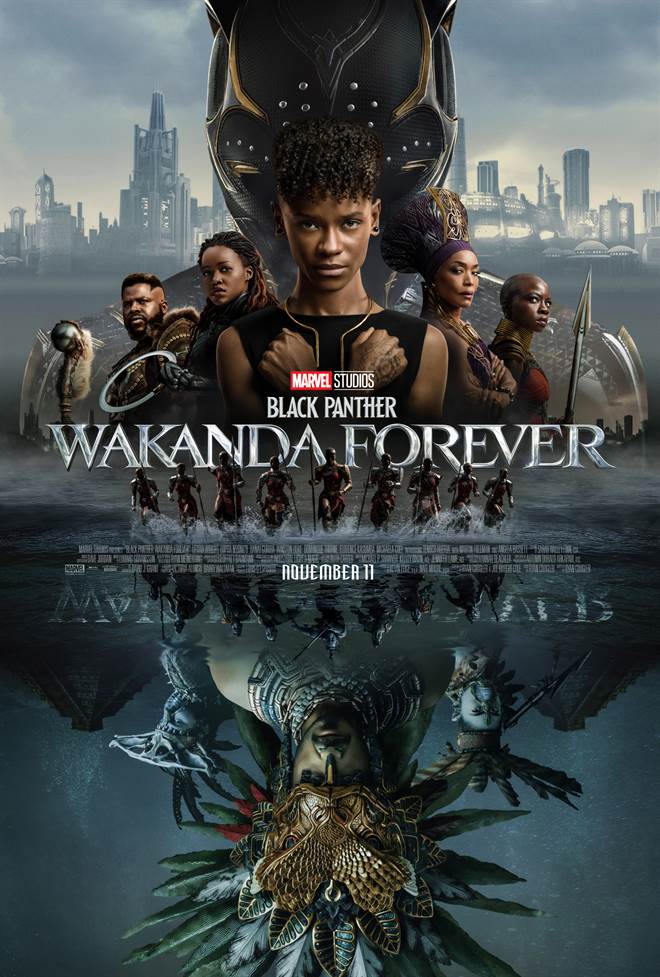 The Marvel Cinematic Universe began phase one fourteen years ago with Robert Downey, Jr. (Sherlock Holmes) in Iron Man.  One decade and at least a dozen-plus films later, audiences were introduced to Black Panther portrayed by Chadwick Boseman (Ma Rainey's Black Bottom).  Four years later, the world was shocked to find out that Boseman silently suffered and ultimately succumbed to cancer.   With the loss of the lead actor, the sequel, Black Panther: Wakanda Forever, seemed to be in limbo. By March 2021,  Marvel announced the role would not be recast and focus would shift to Shuri (Leticia Wright; Death on the Nile). After rewrites and release delays, Black Panther: Wakanda Forever will premiere this week in the United States.

With the death of King T'Challa/Black Panther (Boseman) and the release of Vibranium worldwide, Wakanda has become vulnerable to attacks. When a drill crew in the Atlantic Ocean discovers more Vibranium, a group of blue soldiers come from the sea and destroy the drill platform killing the crew.  Wakanda is initially blamed for the attack, however, when Queen Ramonda (Angela Bassett; Strange Days) and Princess Shuri are alone in the Wakandan wilderness one evening, they encounter Namor (Tenoch Huerta; The Forever Purge), the King of the Tālochān, underwater dwellers, who tells them to find the scientist who created the vibranium detection machine or he will have his people destroy Wakanda.

However, when Shuri and Okoye (Danai Gurira; The Visitor) head to America to find "the scientist" they are shocked at what they find. Unwilling to turn the scientist over to Namor, the Tālochān, attack Wakanda, forcing Shuri to reluctantly take up the mantle of Black Panther.  Warned as to what her motives might create, Shuri is blinded by revenge putting all Wakandans at risk.

While Boseman's absence is definitely felt, most of the incredibly talented cast from the first film returns elevating the level of acting throughout the film.  Huerta makes an excellent addition and portrays Namor as a layered antagonist who isn't all bad but who indefinitely is not good.  Wright has always been good as the tech-savvy, snarky younger sister of the king but she falls short as a Wakandan leader.  Gurira showcases her acting as more than the expressionless soldier we met in the first film.  Her character's arc allows her to explore her emotions and expand her acting chops.

Of course, the ongoing rivalry between the MCU and DC Comics is always evident.  Namor is Marvel's answer to Aquaman but, for once, I must admit DC does it better but that seems to be a rare occurrence.  Take, for example, DC Comics' release earlier this month, Black Adam.  Comparing the two films, Black Panther has a better script, costumes, and special effects.

Speaking of, Ruth E. Carter's (Coming 2 America) costumes should grant her another Oscar nomination if not the win.  The exquisite outfits that Ramona wears are breathtaking and the white dresses she and Shuri wear for T'Challa's funeral are obviously beautifully embroidered in an old-world kind of charm while offering a modern twist.  The cinematography and photography are both well done.  Wakanda and Tālocān are showcased with sweeping vistas and pops of color making them stand out in a unique way while also making them memorable.

Had Boseman been able to reprise his role, Black Panther: Wakanda Forever would have been a completely different film, possibly rivaling the original.  Sadly, we will never know and the loss of Boseman is one that will be felt throughout the acting community for some time to come. Marvel plants several tributes to Boseman throughout the movie, and they are all very well done.  I wanted to stand up and applaud almost from the very beginning of the film.

Black Panther: Wakanda Forever, was definitely worth the wait and head and shoulders above the summer release of Thor: Love and Thunder. It is one of the better films in phase four of the MCU but doesn't live up to 2018s Black Panther.