Andor didn’t grab me right out of the gate but it has started to gain momentum and I can see it picking up steam racing for the finish line. 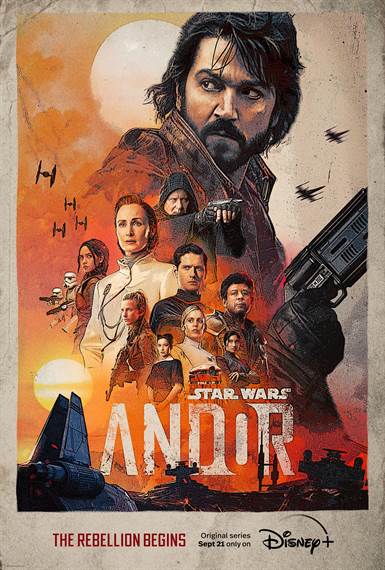 In 2019, the Star Wars franchise seemingly came to a close with the ninth installment of the film series, Star Wars Episode IX: The Rise of Skywalker.  Of course, everyone should know better by now that, even though that storyline was completed, there are still hundreds of other characters in the galaxy that could have their own saga.  Cassian Andor, (Diego Luna; Y Tu Mamá También) is simply one of them.  Introduced as one of the main characters in Rogue One: A Star Wars Story, Cassian Andor is now getting his own television series on Disney+.  Set five years before the events of Rogue One, the show, simply titled Andor, gives some insight into where he came from and how he became involved with the Rebel Alliance.

Cassian and his sister lived on a long-since abandoned mining planet with other survivors who were left behind. They lived in huts in the woods and scavenged for whatever they could find.  One day a ship crash landed on their planet and as they went to investigate, Cassian came along but told his young sister to stay behind.  After the leader of their group was shot, everyone rushed back to their huts...everyone except Cassian.  He chose to explore the damaged ship and that was where he was when Maarva (Fiona Shaw; Harry Potter series), a scavenger, found him and took him with her, unaware that his sister was still on the planet.

Present-day Cassian is a thief who is looking for his sister.  However, when he walks into a bar and inquires about her, he runs into a dead end (literally).  After being jumped, Cassian kills two security officers and suddenly becomes public enemy #1. Desperate to get money to go on the run, he tries to fence a very valuable item to Luthen Rael (Stellan Skarsgård; Dune) but Rael has a different offer for Cassian.

Are you confused yet? After Episode one, I was and honestly, I wasn't too crazy about watching another episode because of it.  The flashbacks when Cassian and his sister were on their planet made little sense even though I understood the writers were trying to establish Casein's backstory.  I walked away from that first episode with more questions than answers.  Fellow critics were raving about this show and I couldn't understand what all the fuss was about.  Still...I soldiered on.
Episode two got better, though some plot points were still muddled.  Episode three got even more interesting and puzzle pieces started falling into place.  It piqued my curiosity enough to keep me interested and some of the initial confusion dissipated.  Episode four has some teeth to it and I can see how, after 24 episodes, the overall story will transition into Rogue One: A Star Wars Story.

Luna (thankfully) reprises his role from the film.  Replacing him would have muddied the waters even further, not to mention that he does a solid job as the lead.  Skarsgård was a pleasant surprise as there was conflicting data as to whether or not he was in the series.  The rest of the cast is good so nothing stands out in a bad way.

The CGI, however, is somewhat it or miss and there are several times where backgrounds, laser blasts, and creatures are unrealistic.  I wonder if Disney could have taken more time to clean up the graphics or perhaps they did, and this was the end result.  The visuals aren't all bad which only makes those moments that stand out even more.

Disney+ has now brought us quite a few of these Star Wars stories - The Mandalorian, The Book of Boba Fett, etc. - with varying degrees of success.  Andor will be the longest running of these series with twenty-four episodes over two seasons but the jury is still out as if it will be the best.

However, so far the episodes don't feel as if they are part of the Star Wars Universe, which is both good and bad.  Andor isn't cookie cutter and therefore should keep viewers coming back each week but it is different enough that diehard Star Wars fans may feel as if this isn't a part of the franchise.

Andor didn't grab me right out of the gate but it has started to gain momentum and I can see it picking up steam racing for the finish line.  Only time will tell if it can outpace the competition to bring home the blue ribbon.

Listen to the Andor soundtrack on Apple Music.