Earth Girls Are Easy is, at its core, a musical and this is where the audio really shines. 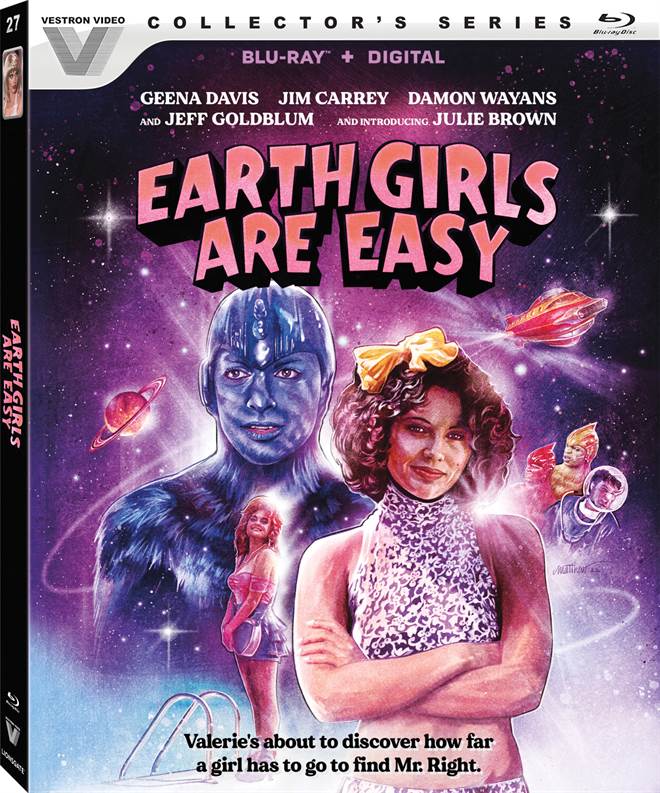 Earth Girls Are Easy (EGAE) is a difficult film to pin down. A romantic comedy, a musical, a 1950's-inspired, schlocky Sci-Fi. It is all of these things rolled into one.  At the time it was released I did not like this movie, in fact, I rented it and remember barely getting through it. I do remember loving Julie Brown's Character Candy Pink (Clueless), and thought she was the highlight of the film - snarky, bubbly, and, at times, clever. It wasn't until watching this Blu-Ray for review that I learned that she was the writer and it was actually her project. Even the songs were written by her, and the movie was born out of the lyrics to the song 'Earth Girls Are Easy'.  Now it is all starting to make sense.

So, furry aliens intercept human transmissions, see scantily clad "hairless women" and decide to fly into town to 'pick up chicks. Once Valerie and Candy decide to help them pass for humans by shaving them down, suddenly they are hot and of course, Julie decides to take them out to the club. One of the best lines in the film is uttered by Julie Brown's character when introducing the guys to some friends, she says "They're from Mars or something, couldya die."

I know...it's completely silly but that's what makes this movie work. It doesn't take itself seriously. Just sit back and enjoy the ridiculous story, bright colors, and predictable plot.  For all its over-the-top conceits, the actors turn in solid performances. Jim Carey and Damon Wayans are usually funny and it is cool to see them early on in their careers.  Geena and Jeff were actually a couple at the time, and they were hired as a package deal on this one. They have real chemistry in this movie, and obviously, their characters were meant to be together, but her character Valerie Gail (get it, Valley Girl?) is not exactly a great judge of character. Who cares though as they will live happily ever after.

I imagine a sinister subplot where the aliens return to their home planet with Valerie, cook, and eat her, in order to ensure humans are a good food source, then eventually returning to Earth to cull the rest of the population... But I digress. Anyway, the movie itself, released by Lionsgate, is 1080p High Def, 2.35:1, with an English 2.0 DTS HD Master audio track. What they did really well with this transfer is with the brightly colored, sugary set pieces. The movie looks fantastic, dripping with '80s, garish, neon goodness.  Even the animation of the "space ship', which looks like it took its design straight from an old Flash Gordon serial, makes its transitions without the usual 'halo' effect that can appear all too often.  As for the audio, there are no crazy explosions or dynamic audio special effects, however, the dialog is front and center and fills the space well.

The film is, at its core, a musical and this is where the audio really shines. The music is bright and the synth punchy, if a bit too "bright" in places, but the music (written by Julie Brown) is really brilliant. One of my favorite songs, "Cause I'm a Blonde", almost didn't make it into the movie, but is the show-stopper. The lyrics to this song are hysterical, and Brown delivers them with perfect tongue-in-cheek inflections. She also plays the quintessential valley girl, perfectly probably because she actually is one, having been born in Van Nuys, CA.

As with most of the Vestron Collector's Series, there are plenty of special features to dig into. Audio commentary with Julie Brown, Interviews with Brown, as well as Director Julien Temple. Behind the scenes/deleted scenes and more. This movie made no waves at the time but like many films from this era, it found its audience on home video and cable/TV presentations.  I wasn't enthused to watch this one again but I was pleasantly surprised that this was a fun, if silly movie. As a musical, it especially works, and the actors are all top-notch, so they really sell the absurdities.
Fire up the warp drive, pop some corn, extra butter, and enjoy this fast, and fun film.

For more information about Earth Girls Are Easy visit the FlickDirect Movie Database. This release has been provided to FlickDirect for review purposes. For more reviews by Leonard Buccellato please click here.

Leonard became obsessed with horror movies at the tender age of 7 when he first saw the movie Blacula (which quickly scared the Hell out of him). From there, all bets were off, from Grizzly and Jaws to The Thing and E.T, his love of movies took on a life of its own. His passion for movies is matched only by his love of writing and literature.

Scary Stories to Tell in the Dark