With drama, action and some comedic moments, Doom Patrol: The Complete First Season has something for everyone. 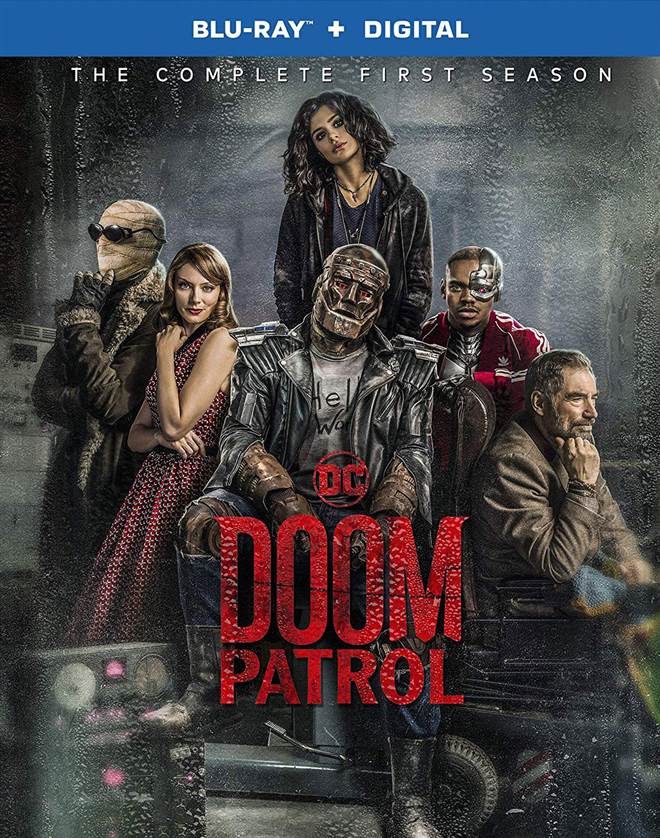 The Doom Patrol or the "World's Strangest Superheroes" first appeared in DC Comics in June 1963.  Made up of a group of misfits with special gifts, they lived in basic isolation as their unique abilities were born out of trauma and pain.  This past year this group was introduced on television during an episode of DC Titans and then premiered in their own series on February 15th.  With an unusual perspective, they captured audiences' imagination during their fifteen episode Season 1 and were renewed for season 2 this past July.  Now Doom Patrol, The Complete First Season Blu-ray is available for purchase in stores.

The Doom Patrol is made up of a group of individuals who all received their powers through tragic circumstances and who were all treated by the Chief, Dr. Niles Caulder (Timothy Dalton; The Living Daylights).  They include Jane (Diane Guerrero; Orange is the New Black) who has 64 different personalities, Rita Farr (April Bowlby; Drop Dead Diva) who was a Hollywood star until her genetic structure changed making her a "blob" in times of stress, Victor ""Vic" Stone/Cyborg (Joivan Wade; The First Purge) whose scientific father made him part machine after an explosion almost killed him, Larry Trainor (Matt Bomer; Magic Mike) A US Air Force captain with a negative energy being living inside of him and Cliff Steele (Brendan Fraser; The Mummy) who was a famous NASCAR Driver who basically died in a car accident until the Chief transferred his brain in to a robotic body.

Season 1 revolves around the team trying to rescue the chief from Mr. Nobody/Eric Morden (Alan Tudyk; Firefly) who has the Chief trapped in "The White Space".  Throughout the season they wrestle with their personal demons while meeting numerous nefarious individuals out to do them harm as they travel to various locations and dimensions in an effort to save the chief.  The season ends with the team breaking up but getting back together to help Caulder's  Daughter, Dorothy Spinner.

The cast is made up of seasoned veteran actors who all seem to know their characters well.  The team has good chemistry that allows them to play off each other.  Bowlby is excellent as the Hollywood starlet from the '60s and Guerrero is masterful as she switches personalities in the blink of an eye.  Tudyk's voice lends itself to the menacing and devious Mr. Nobody and his tonal quality makes those attributes come through as he narrates the series and plays the main antagonist.

The Blu-ray is presented in 1080p High Definition video quality with a 2.20:1 aspect ratio.  This format makes for a clean transfer with sharp details and rich colors.  The DTS-HD Master audio 5.1 is crisp with plenty of low tones booming throughout the action sequences and an excellent mix of the soundtrack and dialogue.  Neither overpowers the other as the music seems to permeate most of the episodes.  The Combo pack includes the Blu-ray disc, Digital download, a gag reel, deleted scenes and the obligatory visit Georgia PSA that any show/movie shot in the state is required to make.

The series combines humor and action with terrific character drama and an intriguing storyline.  Each episode delves into the past of the team while introducing more bizarre places and things along the way.  The writers also seem to like to use animals in strange and unique ways such as the farting donkey delivering a message in episode one and acting as a teleportation portal and the rat who sends Cliff into a breakdown.

Not your traditional Superhero show, the team is part support group, part dysfunctional  FBI like organization.  With drama, action and some comedic moments, Doom Patrol: The Complete First Season has something for everyone.  Check it out today and catch up on the newest hit show before Season two premieres next year.

For more information about Doom Patrol visit the FlickDirect Movie Database. This release has been provided to FlickDirect for review purposes. For more reviews by Allison Rose please click here.

Allison Rose
Doom Patrol is a different kind of “superhero” show that works because of witty and snarky writing delivered by some excellent actors...
Full Review | Grade: A

Allison Rose
If there was an "Island of Misfit Toys" in the world of comic books, Doom Patrol would certainly fit the bill perfectly.
Full Review | Grade: A

The Sword and the Sorcerer

Snakes On A Plane