Anyone who has seen the classic film, knows Bogart and Bergman had undeniable chemistry, which is part of what makes the movie as great as it is. 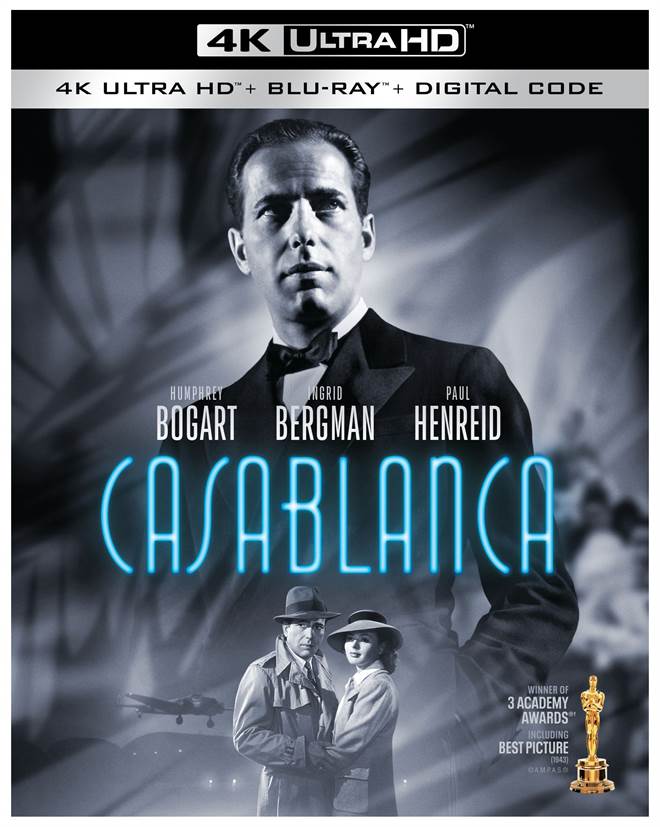 One of the most famous, misquoted movie lines, besides "Luke, I am your father" from The Empire Strike Back, is "Play it again, Sam" from Casablanca.  The line, in reference to the love song, As Time Goes By, was said by Humphrey Bogart's (The African Queen) character, Rick Baines, to his employee, Sam (Dooley Wilson; Stormy Weather), telling him to play the song that reminds Rick of his love affair with Ilsa Lund (Ingrid Bergman; Spellbound), in the film Casablanca.  As this classic movie turns 80, Warner Bros. Pictures is set to release it this month in 4K.

As World War II is raging throughout Europe, Rick Baines owns a nightclub in Casablanca, Morocco. There, all manner of people gather: those trying to escape Axis forces and those working with Axis forces, while Rick remains neutral.  When a regular patron, Ugarte (Peter Lorre; The Maltese Falcon), tells Rick he stole papers of transit from German soldiers and plans to sell them at the club.  He asks Rick to hold the papers but is killed before he can retrieve and sell them.  Suddenly, Rick hears Sam playing the one song he has forbidden to be played but when he goes to the piano to scold Sam, Rick sees the woman he loved, Ilsa sitting in his club.

Anyone who has seen the classic film knows Bogart and Bergman had undeniable chemistry, which is part of what makes the movie as great as it is.  Director Michael Curtiz (Mildred Pierce) smartly gives his leads the necessary moments to establish their connection and unabated mutual attraction.  Curtiz has excellent pacing and establishing shots that move the film along without seemingly dragging.

The upgraded video quality showcases the beauty that is Casablanca.  Though filmed in black and white, the various grey shadings offer the viewer a detailed view of every scene.  The 2160p quality is a vast improvement. The same mono track that was used previously also graces this release and, while it is well done, I wonder why they didn't attempt to sharpen that audio even more.

Included in the 4K combo pack are the previously released 70th Anniversary Edition standard Blu-ray and a redeemable digital code.  The only extras on the 4K disc are Audio Commentary by Roger Ebert and Rudy Behlmer and a two-minute Introduction by Lauren Bacall.

The Blu-ray has the same commentaries and introduction by Bacall plus Warner Night at the Movies, which includes: Now, Voyager Theatrical Trailer, Newsreel, Vaudeville Days, The Bird Came C.O.D., The Squakin' Hawk, The Dover Boys at Pimento University, Great Performances: Bacall on Bogart, Michael Curtiz; The Greatest Director You Never Heard Of, Casablanca: An Unlikely Classic, You Must Remember This: A Tribute To Casablanca, As Time Goes By: The Children Remember, Additional Footage, Deleted Scenes, Outtakes, Who Holds Tomorrow, Scoring Stage Sessions Knock On Wood Alternative Version, As Time Goes by Part One Alternate Take, 4/26/43 Lady Esther Screen Guild Theater Radio Broadcast, 11/19/47 VOX POP Radio Broadcast, Trailer, Theatrical Trailer, and Re-Release Trailer. With hours of extras to enjoy and upgraded audio and video quality, the 80th Anniversary 4K combo pack is an excellent purchase choice, especially for fans of the film and the lead actors.

While the extras don't offer any new material the upgraded video is a treat and the Mono DTS-HD master audio 2.0 gives the movie enough depth so it doesn't stand out negatively.  One need not be a Bogart, Bergman, or a classic movie fan to appreciate a great story that is well acted and filmed, even if it doesn't offer the action sequences or blood and gore that younger audiences tend to gravitate towards these days.

As we start gearing up for the Holiday season and spending time with family, I suggest buying a copy of Casablanca to watch with loved ones over the winter break.

For more information about Casablanca visit the FlickDirect Movie Database. This release has been provided to FlickDirect for review purposes. For more reviews by Allison Rose please click here.

Chris Rebholz
Casablanca is great. It's the quintessential Hollywood film; a classic example of the studio machine: fantastic acting, an artful directorial style, a sentimental score, and a story that will warm the many frozen rivers of your cold, cold heart. It's filled with classic lines ("I stick ...
Full Review | Grade: A

House at the End of the Street