For Trekkies this set is well worth the cost. 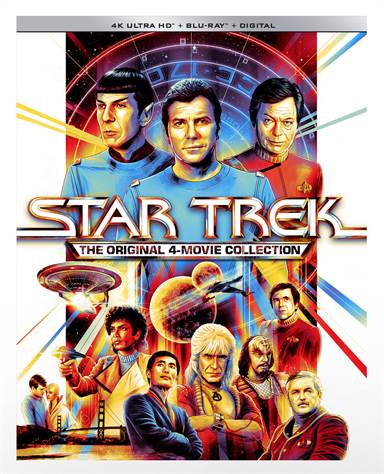 In 1966 NBC aired a new science fiction series created by Gene Roddenberry called Star Trek.  Originally, it wasn't very well received and was canceled after three seasons due to low Nielsen ratings.  Several years later it became a hit in syndication and eventually spawned eight television series, thirteen movies, books, games, and toys.  It has become an extremely popular commodity with fans and seems to have a cult-like status including hosting conventions all over the world.  To coincide with what would have been Roddenberry's 100th birthday, Paramount Pictures has remastered and released the original four films in 4K.

The four-film combo pack includes Star Trek: The Motion Picture, The Wrath of Kahn, The Search for Spock, and the voyage home.  While they had varying degrees of popularity and critical acclaim, they included members of the original cast, endearing them to older fans.

The third movie, titled The Search for Spock, has Kirk and his crew taking the decommissioned USS Enterprise to the restricted Genesis Planet to retrieve Spock's (Leonard Nimoy; Fringe) body.  The final film in this set is The Voyage Home where the crew has to time travel back to 1986 to save future Earth which has become a barren wasteland.

Originally released in theaters over a seven-year time span, the four movies had three different directors (including Leonard Nimoy) giving the films somewhat different looks.  While there is some level of cohesion and synchronicity between the four, each director left his own mark on their respective project.  Of course, creator Gene Roddenberry was alive to offer input and insight into the stories and characters.

As with many of Paramount Pictures remastered releases, it is obvious the time and care they put into updating the films to utilize today's technology.  The result is incredible with many of the minute details benefiting from the transfer.  Fabrics are much more meticulously showcased, and colors pop off the screen with subtle hue differences throughout.

The Dolby TrueHD 7.1 audio upgrade is probably the best part of this set.  The auditory experience is fantastic with ambient sounds permeating the room as the dialog comes at the viewer from the upfront speakers.  While there is a little bit of noise here and there (which is to be expected) Paramount did a great job trying to clean up the tracks and the result is amazing audio paired with bright and clean visuals.

The set comes with eight discs total broken into two cases.  The first case houses all four movies in 4K and the second one has the Blu-ray discs which also holds all the extras.  The pack also includes the Digital HD codes.  Unfortunately, this set doesn't include any new extras and leaves out some of the previously released ones so if you want to keep those older extras, don't throw out your old discs.

For "Trekkies" this set is well worth the cost.  To see and hear these original movies with upgraded enhancements is a treat for any viewer but certainly for fans of the 1960's series. I can only imagine that Roddenberry himself would be impressed with the enhancements.

Star Trek was groundbreaking for its time, including topics like environmental issues and interracial couples.  Therefore, it makes sense that the four original films would get upgrades from groundbreaking technology.

There is no better way to celebrate the legacy of Gene Roddenberry during the 100-year celebration of his birth and Paramount Pictures deserves kudos for creating this brilliantly enhanced set.

Listen to the Star Trek: The Original 4 Movies Collection soundtrack on Apple Music.