Home / Reviews / The Conjuring 3: The Devil Made Me Do It

The Conjuring 3: The Devil Made Me Do It 4K Ultra HD Review

The third installment in The Conjuring series, offers much of the same look and feel as the first two films while not necessarily being quite as scary. 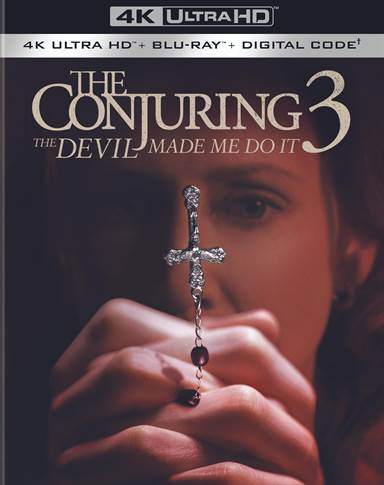 Ed and Lorraine Warren were Roman Catholics who claimed to be a demonologist and clairvoyant/light trance medium respectively.  They were paranormal investigators who were involved with numerous hauntings/possessions that took place in the 1970s and '80s.  While many chose to believe in their special "talents" others were quick to debunk their claims.  Over the years, much of their work laid the foundation for a few horror movies, including The Amityville Horror franchise and most recently, The Conjuring movies including their "spin-offs" Annabelle and The Nun.  This week the third Conjuring installment, The Conjuring: The Devil Made Me Do It heads to stores on Blu-ray, 4K UHD, and digital download.   It was 1981 in Brookfield, Connecticut.  Eight-year-old David Glatzel (Julian Hilliard; The Haunting of Hill House) is supposedly possessed by a demon and Ed (Patrick Wilson; Aquaman) and Lorraine (Vera Farmiga; Up In the Air) Warren are there to witness the exorcism.    During the event, David's sister's fiancé, Arne Johnson (Ruari O'Connor; Teen Spirit) invites the demon into his body to save David.  Ed watches the demon possess Arne but has a heart attack and is comatose for a month.  Once he awakens, he tells Lorraine what he witnessed, and she warns the police.  However, it is too late as Arne has killed his landlord.  At his trial, Arne pleads not guilty and tries to use demonic possession as a defense.  Based on a true story, The Conjuring: The Devil Made Me Do It, once again pairs Wilson and Farmiga as the paranormal investigators.  As we have seen in the previous two films, they have great chemistry which makes their story of husband and wife believable.  Hilliard, for being young, does a great job while given the difficult task of playing a child possessed.  O'Connor offers the look and feel of a young man who truly has no idea what happened to him that would make him want to kill his landlord and Eugenie Bondurant (The Hunger Games: Mockingjay) is mesmerizing at the Occultist, a character that enters the story later in the movie.

Directed by Michael Chaves (The Curse of La Llorona), the third installment in The Conjuring series offers much of the same look and feel as the first two films while not necessarily being quite as scary.  The push/pull connection between Lorraine and the Occultist is interesting and makes the story more enjoyable.  The two women, Farmiga and Bondurant, have strong presences on screen, and watching them play off one another is a treat.

The 2160p high-definition resolution of the 4K disc shows in-depth details, especially when Ed and Lorraine discover the totems.  These little statues are intricately detailed which is showcased beautifully in 4K.  Like most horror movies, the film is dark lighting-wise, but the 4K version has deeper black tones and truer colors than the standard Blu-ray disc.

The Dolby Atmos audio track makes this movie sound even more incredible than it looks. The surround sound pulsates straight into your bones adding an element of suspense to the intensity of the scenes.  The dialog is crisp, clean, and stands out amongst the music and ambient noise.

The extras, which are located on the standard Blu-ray disc, include: The Occultist, By Reason of Demonic Possession, Exorcism of Fear and DC Horror Presents: The Conjuring: The Lover #1. Totaling all of thirty minutes, they are interesting and insightful.

As a franchise, The Conjuring movies are a cut above your average horror films but like most trilogies, they tend to get worse with each new sequel.  This time around the story isn't as interesting as its predecessors but still includes some elements that make the viewer acutely aware The Conjuring: The Devil Made Me Do It is but one part of a larger whole.

Purchase a DVD/Blu-ray/4K UHD physical copy of The Conjuring 3: The Devil Made Me Do It today at Amazon.com

Download The Conjuring 3: The Devil Made Me Do It in Digital HD/4K from the iTunes store.

Listen to the The Conjuring 3: The Devil Made Me Do It soundtrack on Apple Music.

For more information about The Conjuring 3: The Devil Made Me Do It visit the FlickDirect Movie Database.